Idaho Laughter is ON! 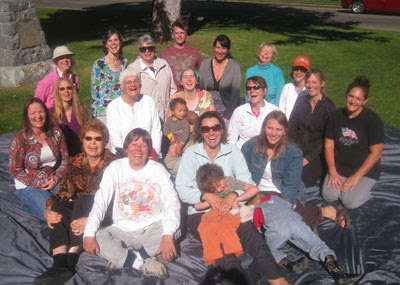 Yahoo! The "Laughter By the Falls" Lunchtime Laughter Club has officially launched! There were eight of us for the inaugural session last Tuesday, and today, the second session, twenty two of us laughed together in the sunshine! (The above photo doesn't include those who had to dash back to work immediately following the session.)

We've been blessed with idyllic autumn weather thus far--a blessing from the laughter gods, I say, haha!--and have been soaking up the sunshine in the park along the river in downtown Idaho Falls. (The location is the southwest corner of the intersection of Memorial Drive and E Street, just where Riverside Drive turns into E Street.)

Laughter yoga incorporates laughter exercises with yoga breathing techniques, and the sky's the limit when it comes to inventing laughter exercises! Today, among other things, I took us on an imaginary field trip to celebrate fall harvest. We mentally traveled to a farm, where we smelled flowers, discovered we were allergic to those flowers (ah-ah-ah-CHOO-hahahaha!), picked apples (reaching for the top of the tree, naturally), hauled heavy pumpkins from a pumpkin patch, chased the chickens that had gotten out of the coop, and then, for the grand finale, we pretended we WERE the chickens. This last exercise had me laughing so hard I could hardly stand up. I don't know about you, but I'd venture that you haven't lived until you have been in a group of people strutting around a public park making chicken sounds and flapping your elbows like wings. HAHAHAHAHA! It was hilarity, indeed. Even now, hours later, I am rendered nearly incapable of typing as I double over with uncontrolled laughter at the memory of the scene.... { *snort* ~ *tears streaming down cheeks* ~ HAHAHA!}

My favorite activity today, though, was the "celebrity" laughter, in which we formed two lines about six feet apart, as though we were lining the red carpet. One by one, we took turns walking through the "crowd", reveling in the applause, while the rest of us cheered and whooped and clapped wildly with genuine appreciation and joy! Talk about affirming--what a feeling to be celebrated in this way, for no reason other than just being YOU! Wow! I wish I could create this kind of "laughter line" for everyone in the world; wouldn't it be amazing if EVERYONE could feel this kind of love and appreciation from everyone else? 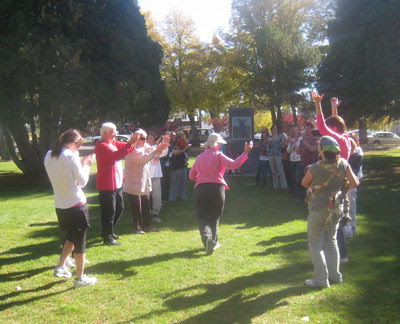 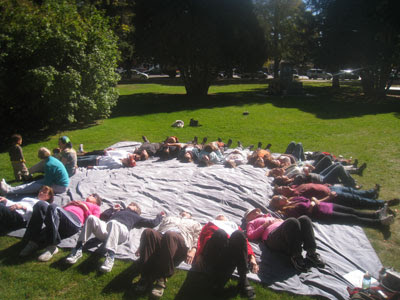 ...and then a guided relaxation, which was once again enhanced by the delicious warmth of the sun's rays on our faces as we melted into the earth.

Email ThisBlogThis!Share to TwitterShare to FacebookShare to Pinterest
Labels: laughter club, Laughter on the Falls

Laughing Anne
Anne Timpany is a Certified Laughter Yoga Teacher, lover of life, ambassador of joy, and is eager to laugh with YOU! Contact me at Anne@LaughingAnne.com for more information about Laughter Yoga sessions, workshops, and coaching.

Calling all pregnant women! Come laugh with me--in person or on the phone! I'm doing prenatal laughter yoga sessions, tailored for the unique physical and emotional journey of pregnancy. Contact me at Anne@LaughingAnne.com for more information.